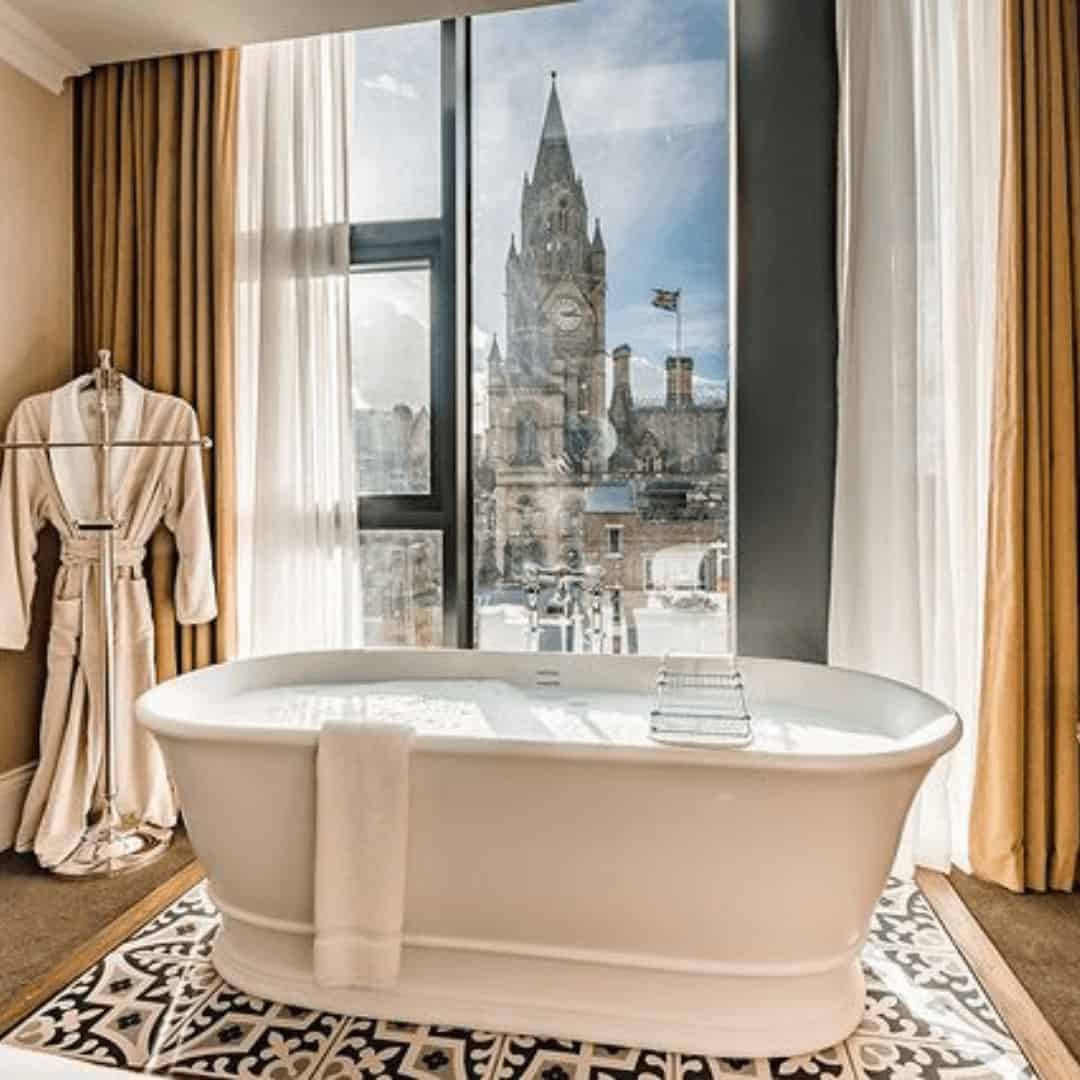 Here at The Jacksonheim Boutique, we are no strangers to luxury boutique Aparthotels. Therefore, because we love to give our guest the opportunity to have a stay as exciting as the city they’re in, we thought it would only be right to give a shout out to some of Manchester’s other boutique locations.

The King Street Townhouse is a stunning four star hotel and a perfect stay if you need to unwind. If that’s not enough the infinity spa pool, overlooking the town hall’s clock tower opposite is to die for!

Since it opened in 2015, Gotham has developed a reputation for excellent five star luxury, in a world where staff are in character and bling is the order of the day. Rooms are dark and moody with luxurious extras as standard.

Captured by @theprivatetraveller
A boutique city hotel offering excellent service and rooms that come with Netflix, Prosecco, milk and cookies before bed, speakers and more; what else could you ask for in Manchester’s trendy Northern Quarter location? In keeping with this, it boasts a contemporary design of exposed brick, fireplaces and metal staircases, giving his once‑textile factory a chic industrial feel.

The boutique hotel chain provides a reliable blend of contemporary style and comfort in their impressive building dating back to 1851. Although a trusty classic on the Manchester hotel scene, there’s no doubt that the hotel’s character still gives the newcomers a run for their money.

Named after a former Manchester mayor and publisher, this place offers good value accommodation in the buzzing Northern Quarter. This boutique hotel and pub is just as cool as you would expect in its location‑it’s loft rooms have record players with a vinyl collection to rifle through, as well as a double sofa bed for extra guests.

Just a two minute walk from Piccadilly railway station, the bars and restaurants of the Northern Quarter are nearby, making this former 19th century textile warehouse the perfect place to stay in a weekend in the city.

Surrounded by bars, clubs and restaurants on canal street. The Velvet hotel’s 19 rooms are individually decorated to the highest most luxurious standard. This boutique hotel is perfect for a big night out as it comes with clubbing deals too!

Located in what was once a Victorian school, this now hotel offers not only amazingly decorated rooms, with huge windows and stand out bathrooms, but the rooftop lounge of dreams.

A boutique Aparthotel with everything you need. Decorated in blush pink, the best part of your stay at Whitworth Locke are the common areas, with coffee shops, cocktail bars and more, this is a haven for a good time getaway.

The spacious and luxurious master bedroom boasts a super-kingsize bed, fitted wardrobe and dressing area with 9ft mirrors, perfect for getting ready or winding down after a long day.

This is a grand, Art Deco building and the Gotham Boutique is all about glitzy decadence and theatre. Opulence and bling rule here, from the gold plated kitchen to the large comfy beds and faux fur throws, this apartment has to be one of the sexiest in Manchester. Seeing is believing.

Showcasing all of its original features, with dark black walls, a large black polished concrete bathroom, this apartment is in a class of its own.

Our Luxe Brooklyn Loft Boutique is a defiant homage to the Gilded Age of New York City and the promise of the New World. It stands as a hive of theatricality and energy. Located a couple of minutes east of Piccadilly station, providing you with the ideal base from which to explore Manchester.

Brooklyn welcomes the world to its streets, and we invite the world through the doors of this Boutique. Guys, dolls, grifters, shifters and all folk in between.

Our Luxe Manchester Warehouse Boutique is a defiant homage to the industrial age of the city, whilst also encapsulating the new, vibrant and cosmopolitan city it has become.

Manchester, birthplace of the industrial revolution and with its own unique character, welcomes the world to its streets. We invite the world through the doors of this Boutique. Guys, dolls, grifters, shifters and all folk in between

Designed for get-togethers with family and friends. The open-plan living space with fully-equipped kitchen and dining table for 6, was made for those demanding space and opulence.

With the two plush king sized beds in both the bedrooms and high end pull out sofa bed in the living space, this boutique is spacious enough for both lounging and entertaining. You’re all set to enjoy a comfy and luxurious stay.

Every room boasts unrivalled NYC-style views across the stunning Manchester skyline to the north east and as far as the Peak District. Live feeling like the king or queen of the city.

Luxe Boutique In The Clouds

An apartment that has been lovingly designed and featuring high quality appliances and finishes. With bespoke furnishing to accommodate get togethers around the dining table or around the TV, it truly is the perfect place to hang out with friends

Every room boasts unrivalled NYC-style views across the stunning Manchester skyline to the north east and as far as the Peak District. Live feeling like the king or queen of the city